Manchester United and Spurs shared the spoils 1-1 at Tottenham Hotspur Stadium as football returned in the Premier League. Goals from Steven Bergwijn and Bruno Fernandes lighted up a frenetic contest as far as the three points are up for grabs.

In the end, it finished a goal a piece with both managers (Jose Mourinho for Tottenham Hotspurs) and (Ole Gunnar Solskjaer for Manchester United doing a great job in the dugout.

Following the full time results between both English giants, we take a close look at the interesting statistical analysis from the Wembley contest.

The match produced a total of 3 + 6 = 9 shots on target in the contest. Striker from Anthony Martial, Son Min-Heung and Bruno Fernandes ensured that both sides were tested on the pitch.

The Red Devils were dominant having 6 shots as compared to Spurs 3 shots on target. It ensured that they crawled their way back with an equalizer in the 81st minute.

Manchester United’s overall ascendancy was also reflecting here as they culminated 4 out of the entire 7 shots off target in the duel.

Spurs had 3 shots off target but deservedly took the lead through Dutch and Tottenham winger Steven Bergwijn in the 27th minute. It finished one goal apiece(1-1) between both teams. 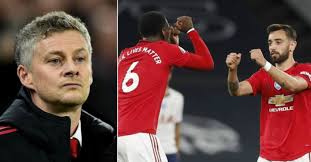 The Red Devils showed a level of midfield superiority in the contest. It was not a fluke as the likes of Bruno Fernandes, Fred and Scott Mc Tominay led sway in the middle before Paul Pogba replaced the latter in midfield.

Spurs were made to do with 39% of the ball compared to Manchester United’s 61% of the possession.

Both sides ensured that the corner-kicks tally up to 7+6=13 corners in the 90 minutes duel. Spurs were at their best here pulling the string by all measure following their 7 corner haul.

The visitors were slightly edged on this stance having 6 corner-kicks despite dominating the match for much of the contest.

Both sides rallied for the three points at stake in the game. It ensured that both teams were caught out of position while attempting to exhibit a bit of their predatory instinct.

Jon Moss (the match referee) got Spurs concede 1 offside compared to 3 awarded (off sides) to the Red Devils.

The fouls statistics here is amazing following a total of about 17 +18 = 35 fouls accumulated in the game.

It sees United accounting for 18 fouls despite controlling possession with a 61% rate. The London side Tottenham Hotspur recorded 17 fouls in the entire 90 minutes.

Despite the numerable couple of fouls recorded in the contest, the match referee (Jon Moss) made earnest effort to moderate the encounter.

In the end, we have only one booking as United’s Daniel James failed to escape the Yellow Card in the 41st minute at Wembley Stadium.

The match summoned up to a total of about 7 + 8 – 15 goal-kicks in the entire contest. Both sides mounted pressure at both ends of the pitch with attacking talent on display in succession.

Manchester United have 8 goal-kicks to their name as compared to 7 goal-kicks from the host Tottenham Hotpur.